If You’re Getting Frustrated with Social Networking, This is For YOU!

What are you waiting for?

Okay – have all the readers left who enjoy social media? Good – let’s go surfing. Strap your goggles on and tighten your creative cap.

Take A Walk Down Empire Avenue

If you’re a regular reader here, you know we test many social platforms. The one we’re testing now has a lot going for it. Best of all, it’s fun!

Now, I know what you’re thinking. You’re thinking, “Not another social networking platform!” But wait – because this one is just a little different.

It’s called Empire Avenue, and it’s relatively young (EA has only been around for about a year). The company doesn’t call itself a social media company, however. Duleepa Wijayawardhana, aka Dups, calls Empire Avenue a “social influence stock market”. You can learn more about the EA Team here, but be prepared… these aren’t your normal bios. For example, apparently, Dups can’t keep a secret and the COO, Robert Kallir, has to reign him in (so, Dups is probably the one to slyly pick at if you want some juicy info). 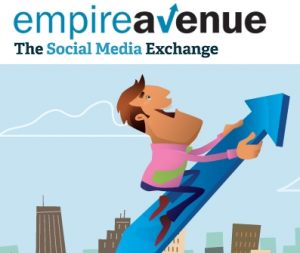 Now, for Facebook fans, Empire Avenue might remind you of “Friends for Sale”, where you buy and sell your friends. However, don’t have preconceived notions based on the similarities. Where EA differs, it really differs.

Empire Avenue is a social networking game, where individuals can buy and sell shares, investing in people and brands. You can win award badges and even get virtual currency, called “Eaves”. Use the virtual currency for things like:

Oh, come on! You want me to take a game seriously? I have real social sites to manage!

No – we want you to take your business’ social outreach program seriously. Here are a few BIG things Empire Avenue has going for it:

It makes networking fun. When something’s fun, more people get involved – and get more fully involved. Seriously, how many of you didn’t play on LinkedIn when they came out with the Water Cooler? That’s the fun we are talking about here – a connection like a bridge that can give you a better understanding of who and what your market is doing.

Through personal, city and interest level communities, you can connect with local people, people with shared interests and – tada – your target market. For example, if you sell organic home cleaning products, what could be better than a community named “Family and Kids”?

More exposure… When someone invests, one of the first things many well tell you is that they go check out the profile of the person who bought the stock. So, let’s say you buy 10 shares of (e)XYZ. The person running (e)XYZ will see that you bought stock and visit your profile. On your profile, they’ll be exposed to:

What Others Have to Say About Empire Avenue

Now, don’t take our word for it. First, visit Twitter. Search for EmpireAvenue and read some of the comments. A few talk about how they don’t understand what EA is or how to use it. Most, however, really get into the whole “social marketing, networking, stock investing game, thing”.

Then, you can read Why Top Brands Are Investing So Much Time in A Social Media Leaderboard. Read Katharine Robinson’s commentary in Empire Avenue – The Thinking Person’s Farmville, where she makes some good points. There’s also a good article about how Empire Avenue Helps Teach Social Media Engagement. 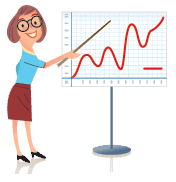 –And finally, just in case you’re the type of person who never does anything unless the big dogs do, here’s a sample of people on Empire Avenue:

This list, of course, leaves out people like Jennifer, Kasey, Dedric, Nicole, Dawn, Reg and Gabe. They aren’t big swimmers in the pool of social media. Some don’t have a business, and are just checking out Empire Avenue because they heard it was fun.

The point is, these people count, too. Because social media isn’t really about business – not really, no matter what they tell you. Social media is about making strong connections. It’s about turning potential customers and clients into friends; it’s about creating strong relationships.

For Empire Avenue players, it’s about having fun and building a network while you’re at it.

Some people look at Empire Avenue and either shrug their shoulders or write negative commentary (the comments are interesting) about it. It’s hard for some people to see past the “game” idea. – But then, EA probably isn’t for everyone, anyway.

However, if you’re new to social media and trying to figure out how to use it – or, if you’re tired of same old, same old, give Empire Avenue a try. You might just find your share price – and your engagement level – skyrocketing!

X
Website Conversion – Forget About the ObviousOnline MarketingIs your website doing what it’s supposed to be doing? Is it bringing in visitors that stick around, read and convert? If it isn’t, we ask you to c…

If You're Getting Frustrated with Social Networking, This is For YOU!

5 min
X
Online Marketing: Are YOU Practicing Converting Conversation?…Content DevelopmentThe problem with the word “conversion” is many assume it means “clicking on the call to action (CTA) and following through with the sale”. In …