Testing, Testing – Is This Thing On? Twitter, Tweets and Buttons 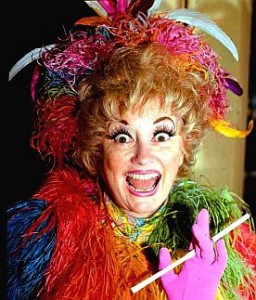 It’s official – Gabriella has left the building. She’s off to Italy for three weeks, and she’s left me in charge. Mwahahaha – the awesome power! *mad giggle*

I’m excited, and I’ll tell you why. I get to test stuff while she’s gone!! Okay, so it’s only three weeks, and it won’t be able to be anything really crazy – I mean, I’m not going to put comments above posts or anything. Don’t be too surprised, though, if you see some changes. Today, it’s the Article Archive, tomorrow, the world (I feel like the mad scientist of websites)!

Allow me to direct your attention to the bottom of the posts, where I’m testing a new button. Well, it’s a new button for us. I want to switch our tweet button from the Official Twitter Button to the Topsy Tweet Button. Gabriella* wants to keep our current button. Therefore, I have to prove why Topsy’s button is better.

*because she doesn’t want to loose the hard work she’s put in the last quarter getting us a ridiculous amount of traffic and RT’s  from pimping on every street corner to promising Nutella jars to anyone and everyone. Furthermore, she let me switch from another version of the Twitter button and we lost a large percentage of the RT power we had… Sure, she’s easy, and always looking to be progressive – to keep up with the times -, but after loosing all RT buttons she lost faith. Faith in the RT values, faith in numbers and faith in these OVERNIGHT success buttons that come and go like the wind (she’s serious about her social, people).

Here’s my argument. Maybe you can help me make it more persuasive, huh?

We’ve used the Official Tweet button (called the OTB from here on out) since it first came out. First, we had problems with the code output… several instances of oh-so-not-sexy “AKPC_IDS +=” code. Okay, so that might have been, MIGHT have been, operator error. I’m willing to accept that and move on.

Then, the real problem showed up, when Gabriella came banging on my door, demanding for me to tell her what I did with her social numbers. To be fair, I had done something with the numbers on three articles a few days before. I changed the URLs, the tweet numbers plummeted to a big fat zero, and I forgot to tell her it would happen*.

*By the way, don’t ever just copy your blog title and publish it without checking the link first. Especially if you use extra characters like dashes, apostrophes or quotes. One, they transfer into fugly URLs. Two, you’re more likely to have broken links and 404 errors if someone copy/pastes the URL to use as a link back to the post. Lessons learned and all that…

Anyway, when she showed up at my door, I assumed she meant the three articles. “You already told me that,” she said, “but what about…” Long story short, we’d lost numbers. Big numbers. They didn’t all go to zero, but we’d lost 50 here, 30 there, 10 there, and so on. Turns out the culprit was the OTB or, to be more exact, Twitter. It took me months and an interesting conversation to figure this out.

You see, Twitter occasionally purges its system of old, dusty tweets. The OTB bases its numbers off the Twitter database. So, when Twitter purges, so does OTB. If you’re using OTB, expect your numbers to drop occasionally.

On top of this, OTB’s count is based on a specific URL. That is, the URL that posts when you RT. So, unless the tweeter actually pushes the button on the page, or you push the OTB and they RT your exact tweet, you don’t get the count.

Finally, there’s no style. It’s just… blue. There are WordPress plugins that go along with this button (TweetButton, WP-TweetButton, to name a few), and they have varying degrees of extra functionality, but… they’re just blue. Twitter Fail Whale blue, at that.

I’m not a colorist; I don’t have anything against blue, but it just doesn’t go with the site, know what I mean? Blue is just not how we roll.

Anyway, observe, if you will, the following…

→ Firstly, Topsy’s Tweet Button (TTB) didn’t give me any crap when I put the code in. I didn’t get any stray characters or weird meta descriptions. Bonus; I like that about a plugin.

→ Secondly, TTB’s count is based off Topsy’s database. -And guess what? Topsy doesn’t delete old tweets. For us, TTB shows a count for posts back at the beginning of 2009 (when we really started hopping into social), while OTB shows zip, nada, zilch.

→ Thirdly, you have the option of showing, along with the tweet count, where a particular post ranks in comparison to the others on your site, in terms of Twitter conversation. For example, Top SEO Women – Just the Tip of the Iceberg (July 2010) is the top tweeted post on the Article Archive (by the way, Google Analytics shows it’s our top post, period). I really like that cool little addition.

→ Fourthly, TTB allows you to pull in the tweets as trackbacks to the blog, or as part of the comments. I’m currently dinking with that, so if the bits disappear and rearrange, ignore it – and that’s an order. I don’t know about you, but it seems a handy feature to me; even when someone doesn’t comment on the blog, visitors can still see it’s active.

→ Fifthly, TTB isn’t selective about the link. As long as it leads back to the page, it can be a bit.ly, ow.ly, add.me – doesn’t matter; TTB will pick it up as a count. Therefore, seems to me the count is closer to the real deal than OTB’s.

→ Sixthly, you can filter out your own signal, so you see what others have tweeted. I mean, you already know what you tweeted, right? Why do you need that information to muck up your metrics?

There are a lot more reasons why I’d like to switch to Topsy, but the final big reason is style. Sure, if you want blue, you can have blue. BUT, you can also have brick red, hot pink, wisteria, jade. Thirteen choices and flavors. On top of that, you can turn the “Top [star]” part off, if you prefer not to have it on there. You can just have a retweet button, put the numbers on either side or pop them up on top of the retweet in a big box.

I’d talk about the ability to add hashtags automatically, or add “by @twittername”, etc. but some of these options are offered by the OTB plugins as well. The things I mentioned above are native to the button itself.

I’m not sure if this is enough to back up my theory that TTB is a better button. I’m not sure if it will be enough to convince Gabriella to switch. There’s a reason she’s head of business development for Level343… she looks at the appearance of the company as much as she does the processes of the company; it’s her bailiwick.

Me… well, to tell you the truth… I’m a specie-ist. I just don’t like the looks of that Twitter bird…

Here’s where I appeal to you, dear readers. Are you willing to help me convince Gabriella that TTB is better? By all means, pass it on to me! Or do you disagree? Maybe I’m the one that needs convincing. Share and share alike!

Testing, Testing – Is This Thing On? Twitter, Tweets and Buttons