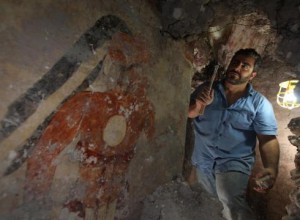 It’s 2012. For years, many people have believed this to be the last year of life on earth, thanks to the Mayan calendar. Now an older calendar has been found that goes on for much longer, which leaves Dooms Day believers guessing again. However, if the end of the world is just “the end of life as we know it”, it’s already happening.

A few questions for you:

For many of you reading this article, the past 100 years or so only covers (maybe) four generations of your family: you, your parents, grandparents, great grandparents. When you think about it, it’s amazing; some born around the same time the Band-Aid was invented (1920) are still alive.

Spiral Notebooks vs… the Tablet

Can you image life without a spiral-bound notebook? Less than 100 years ago (around 1924), these handy creations were born and began to invade the business world with their easy-to-open pages. –But of course you can imagine life without them; we have tablets. Who needs spiral notebooks now?

Did you know the earliest version of the tablet was patented before 1900? Wikipedia is occasionally a good resource, and this is one of those times. The first electronic tablet patent was in 1888 (interesting to look at!), while the first system to recognize handwriting was patented in 1915.

As it turns out, Apple didn’t pave the road to invention. They just put the gilding on it.

The Wright Brothers vs… the Jet Engine

Did you know there are people who haven’t flown in a plane? Yet, the Wright Brothers went on their famous flight in 1903 – a mere 120 years ago. Since then, we’ve managed to get increasingly bigger and better, until creations such as the X43hit the air. Of course, the fastest plane in the world isn’t fit for man’s use, considering that our fragile bodies couldn’t handle 7,000 mph.

That’s what we have jets for, such as the supersonic passenger airliner, the Concorde. Its top speed was 1,350 mph (a far cry from the Wright’s 6.8 mph). It would take less than three hours to get across the U.S. in the Concorde – a 2-and-a-half day road trip.

Libraries vs… the Internet

Do you remember when research had to be conducted at a public library? As hard as it may be for some of you to believe, there are people alive today who have never seen the inside of one. There are people who will look at you in confusion if you mention the Dewey Decimal system (and you know Dewey worked hard on it). Created in 1876, with 23 major revisions, the DDC’s death toll began to sound in 1990, when Tim Berners-Lee developed the protocol for the World Wide Web and HTML.

It rang even louder in 1999, when Google popped up and went public. Since then, the Internet has become the largest, most active research resource in the world. When we want to find out something, we “Google” it on “the Net”. We “surf the Web” for information, sales, product reviews and more. Although public libraries can still be found, they’re found by searching online for them!

Is there anyone alive who remembers using an Anita Mk VIII or Anita Mk 8 for math calculations? How about something like the Cal-Tech? All that calculating goodness culminated in the Sharp (supposedly the first hand-held computer). While the tech sector was desperately trying to get calculators to catch on, it released the Programma 101 (1967), one of the first programmable electronic calculators. Hmmm… programmable. Electronic.

In 1968, The Mother of All Demos sparked off the personal computer revolution (clips of the demo). Since then, what begain as the Programma 101, and the oNLine System (NLS), got bigger, better, faster. The tech sector gave us Hewlett Packard and BASIC programming. We got the IBM 5100 and the Commodore 64 – all with increasingly faster computing (and calculating) speed.

-And then they got smaller. The huge towers disappeared, became increasingly smaller, and then disappeared all together. The screens did the same, until you can now get a computer that’s nothing more than a screen and a keyboard. Then laptops, netbooks… and pocketPCs, which are no bigger than their calculator cousins, but do an insane amount of work in milliseconds.

Technology Doesn’t Die; It Gets Replaced

How many times did the inventors of, say, the integrated circuit, get laughed at? Yet, there are literally hundreds, if not thousands, of products that now use the circuit – and need it to work. How many people, do you think, believed Internet was just a fad, or that Google didn’t have a chance of succeeding?

Answers to the questions at the beginning:

Who surpassed Google as the most popular research engine for shopping? According to a Forrester study, that happy title goes to Amazon. 30% of online buyers research on Amazon first; only 13% research on Google. Unfortunately, the shopping site isn’t just taking away traffic from Google; it’s also taking away sales from retailers who haven’t seen the neon signs yet. Well, worst case scenario, if your offline business fails you can always become an Amazon affiliate, right?

5 min
X
Building Your Customers’ Brand | When the Story Isn’t About You…BrandingIt's funny, isn't it? Funny, as in, ironic. Social media is all the rage, with use growing at an exponential rate. Many marketers (including the Level…