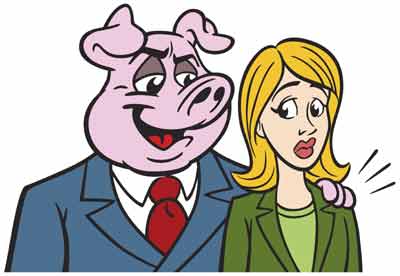 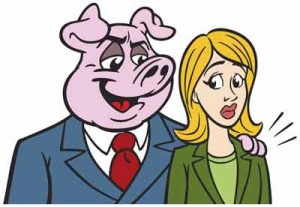 I got embroiled in a discussion a few days ago that reminded me of a problem that I knew existed years ago, but had conveniently forgotten. I’ve run into it before, when I used to attend a lot of conventions every year. I guess whether it’s the NCC or a search industry conference, sexist incidents apparently still abound.

Women being accosted by drunken asses (okay, maybe they weren’t all drunk), with the apparent assumption that any woman there had come only for the opportunity to jump in the sack with the first slobbering buffoon they came across.

Not having been raised to stand by and watch a lady get manhandled against her wishes, I stepped in a few times. Once, I got my ass handed to me by a little guy that had probably earned a black belt in whatever that shit was that he used on me, once I ended up in jail and a couple of times I kicked the crap out of someone that desperately needed it. It’s all good, though, ’cause in every case, the lady in question managed to get herself to somewhere else before the dust settled.

That was many years ago, though. Now, it probably wouldn’t take a black belt to lay me out. But I’d still stand up, because I was raised to know how a gentleman should act and how a lady should be treated. At sixty, I’m not likely to change my spots now.

Now if you’re one of those women that bristles when a man holds the door for you or stands when you approach or tips his hat, you can either stay out of my way or get used to it. I don’t do it ’cause I think you’re the “weaker sex” or to be condescending. I do it ’cause it’s part of who I am. I was raised that way and I raised my son to be the same way (he is) and my daughter to graciously accept it (she does). My grandsons and granddaughters are the same too, which makes me damned proud. We do it out of respect.

But this post isn’t really for you ladies. And it’s not for those ladies that are decidedly non-feminist, that enjoy (or even expect) to be catered to. It’s for the ass-clowns that think that being a few hundred miles from home and six drinks into the evening entitles them to act like Neanderthals.

To the guys that corner women at search conferences and make blatant propositions, to the dudes that think it’s cute to treat a woman like “one of the guys” by being deliberately vulgar or suggestive and to the pukes that haven’t got a ​clue ​when a woman obviously wants nothing to do with them- you all apparently somehow feel more ​manly​ for having shown your ass – you’re all sorry specimens. 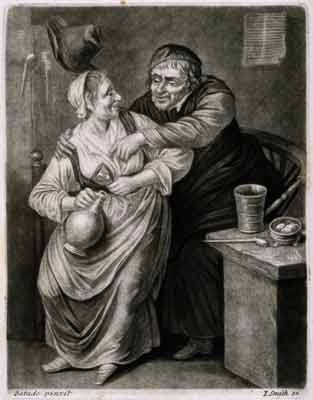 One can only hope you’re all sterile. The idea of any of you being in a position to pass on such attitudes to a son is frightening. That your attitudes could be teaching a daughter that this is her lot in life… revulsion doesn’t begin to describe it.

Ask yourself sometime, if you were nearby and saw some jerk acting like that to your daughter, what would your reaction be? Would it be funny then? Would it be cute? Would you just shine it on and go about your business? If you have ​any ​ redeeming qualities as a man, then I’d guess you wouldn’t stand for it. If you would, I look forward to meeting you in Hell… you’ll be my new hobby.

Not to leave anyone out, how about those of you that were gentlemanly enough to never act that way, but not enough so to step up and put a stop to it? You think you’re better? Guess what – you’re just enablers! ​You ​sent those ass-clowns the message that it’s okay, that it’s just all in fun. ​​ You may have been laughing at it, you may have even glanced disapprovingly at each other. But if you didn’t do anything, you fell far short of the mark that might have made your father (AND your mother) proud of you.

And to the guys that think that sexual confrontations, gender discrimination and such abusive behavior is rare or nonexistent, I say, do what I did. Talk to some women that have attended a number of search conferences – ask them. When I did, I found that most didn’t have ​one ​such episode they’d endured… they had ​several​!

As for the folks that promote their conferences with “playmates” and booth babes, you’re only slightly removed from the cesspool. Instead of taking advantage of an opportunity to improve the situation, you’re just taking advantage, period. You guys must be lovely fathers, too. Would you let ​your ​daughter be a booth babe or playmate? 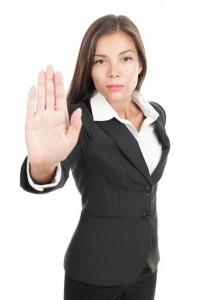 Now, just in case there’s still anyone out there I haven’t pissed off yet, let me take a quick shot across the bow of the ladies that put up with this garbage without saying boo. You do know that you’re enabling that behavior too, right?

I understand that everybody has their own way of handling things, but do ​something! ​ A well placed kick, a drink in the face, scream “NO!”, anything but quiet acceptance. You don’t have to endure that crap! And I am CERTAIN that any conference is likely to have several men present that would agree and would step up, if they were aware of what was going on.

That a problem like this still exists in the 21st century is amazing – and sad. Even sadder is the thought of all the folks that, upon reading this, will tell themselves:

It happens, folks. And the blame for it falls on ALL our shoulders. This really is one of those situations where if you’re not part of the solution, you’re part of the problem. I know which side I stand on… how about you?