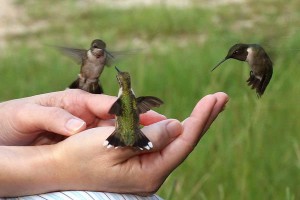 No this is not just for you ornithologists out there but for everyone, particularly those who use smart phones to search with Google.

Google recently threw their 15th anniversary bash, not in the deluxe futuristic Googleplex, but of all places, in the Palo Alto garage where Sergey and Brin first got started. This was a double celebration, in that they also formally announced their “new” Hummingbird search algo, which had actually been live and in the wild for about a month prior.

Google Vice President, Amit Singhal, hyped this as a major update and even though no one in the usually vociferous SEO community seemed to have picked up on it prior to this announcement, IMO, it is indeed important and maybe even marks a significant point in Google history.

Google has had a history of innovation in their 15 year lifespan, all duly noted by the search community, but perhaps not by the general population. Things like their proprietary Google file system, which allowed them to handle the vast amounts of data they were generating, or the Map Reduce programming module, or the more recent Caffeine update, which allowed Google to index more of the web and serve results faster, but Hummingbird is in a different league.

Hummingbird is building on all of these previous advances, but in a Star Wars like manner allows them to go where no search engine has gone before – to where your computer can understand what you say and almost to carry on a conversation with you! OK hard to believe you say – let’s try a small demo: 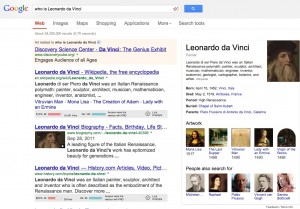 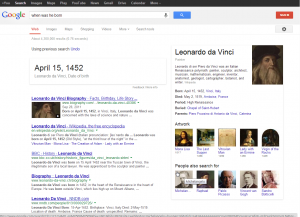 Notice that you did not have to enter the name of the person you wanted information on, after the first query.

This futuristic search capability is not quite perfect, but it is a milestone in the short history of search.

Now put this together with our recent post on Mobile Search Ads and you just might conjure up a scene where you are talking to the onboard computer in your car as drive along the dark and snowy roads of Podunk, Minnesota looking for a hot meal and it responds with the nearest restaurants.

For those inquisitive souls who would like more technical information, I recommend Dave Harry’s recent post A Search Geek’s Thoughts on Google Hummingbird.

X
In Memorial of Keyword Data 2005 – 2013 RIPSEOFriends of Keyword Data were saddened to learn of his passing on September 24th, 2013 in Mountain View California, after a lingering illness related t…

2 min
X
8 International SEO Consultants Speak OutOnline MarketingThe beauty of working with an international market is the connections you make. The information you gather is priceless and the only way to really mak…