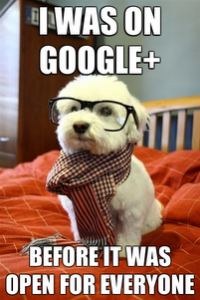 As Google+ Floods the Internet, Other Updates May Be Missed

Level343 LLC » Social Media Marketing » As Google+ Floods the Internet, Other Updates May Be Missed

The social world has been on fire since June 28th. Google Plus posts, tweets and chats are pouring steadily into the social sphere at a steady pace, and show no signs of slowing down.

The social world has been on fire since June 28th. Google Plus posts, tweets and chats are pouring steadily into the social sphere at a steady pace, and show no signs of slowing down. You simply can’t keep up with all of them (we’ve tried).

Many of these posts are somewhat regurgitated content. They’re about how the particular author is using G+ (what the cool kids are calling Google Plus), what they’ve found, why they love it (or hate it), and so on. A few, on the other hand, are quite simply works of art.

AJ Kohn (creator of Blind Five Year Old, SEOmoz Search Ranking Panelist and so on), for example, wrote a lengthy Google+ Review. Rather than expound on how he’s using the world’s newest social platform, he pinpoints a few issues in the seemingly most enjoyed part – Circles. AJ writes:

“I’m not sure Circles works in practice, or at least not the way many though they would. The flexibility of Circles could be its achilles heel. I have watched people create a massive ordered list of Circles for every discrete set of people. Conversely, I’ve seen others just lump everyone into a big Circle. Those in the latter seem unsettled, thinking that they’re doing something wrong by not creating more Circles.”

One thing that really stuck with us at Level343 is his thoughts on Circles privacy. G+ has gone to a great deal of trouble to give you privacy at an insane level of control. Share with a single person or many, a specific circle or entirely public, and so on. Yet, your privacy only goes so far as the person you share with. If they find it humorous, thought provoking and so on, they are quite capable of sharing it with others. Privacy gone.

As well, as AJ shows, the handy dandy sharing model gives away some things about you that you may not have planned. In a test, he manages to hunt down over 1,000 Googlers that may, or may not, have been under the radar as a Google employee. This kind of information is quickly available just by “skimming” the content of others’ circles. Again, the idea of veil of privacy seems a little thinner than first perceived.

Then you have the question that’s been pandered about, “Is Google Plus a Facebook killer?” Amongst the yeas and nays being posted, Marshall Kirkpatrick (Technology Journalist and lead writer for ReadWriteWeb), mentions another possibility on his personal blog.Marshall writes:

“Listening tonight to an interview with Plus designer Joseph Smarr on the IEEE Podcast, it became clear to me that for at least some of Plus’s leadership the goal is not to win social networking outright, or to kill any competitors, but to disrupt the social networking economy with a big enough, good enough and popular enough service that the walled gardens (Facebook in particular) are forced to open up interoperability enough that their users can communicate with the significant enough number of people in their lives that use a different social network.”

Not all the commentors agree, of course. Some argue that Google’s goals are based more on improved PageRank and AdWords click-ability. The comments themselves are a good read, along with the post. What’s Google’s real aim? Only Google knows; however, for anyone paying attention, it’s obvious Google isn’t just creating a new social platform.

From Google’s Mouth to Your Ears

Wired.com published “Inside Google + – How the Search Giant Plans to Go Social” less than five hours after the announcement on the Official Google Blog. In this long, in depth article, the corporation’s code name for Google+, or “Emerald Sea”, is released – one of the smallest details in an fantastic piece of written art.

Writer Steven Levey says the search giant higher-ups have put Google + on the permanent map. Even if it fails, it’s not going anywhere but back to the drawing board:

“No one expects an instant success. But even if this week’s launch evokes snark or yawns, Google will keep at it. Google+ is not a product like Buzz or Wave where the company’s leaders can chalk off a failure to laudable ambition and then move on. ‘We’re in this for the long run,’ says Ben-Yair. ‘This isn’t like an experiment. We’re betting on this, so if obstacles arise, we’ll adapt.’”

This was a great article and well worth reading for those interested in the minds behind Google’s latest venture into social. Again, there’s some definite thought-provoking gold in the comments as well as the post.

With all the “news that is news” about G+ flooding the Net, however, a few other changes and details seem to have slipped by a large majority. For example:

In short, if you want to keep up with Google and you have the head for it, it might be advisable to search through the 40,000 + patents available that relate to search engines. If that’s too much for you, SEO By the Sea breaks some of them down into slightly less technical bits of information.

Are We Jumping the Gun a Little?

Oddly, or perhaps not so oddly, as soon as Google+ came out, people (read SEOs and marketers) started “testing” to see what impact G+ might have on the SERPs. Others immediately began speculating on how G+ could be used for business purposes. Still others wondered how it tied in with +1… and so on.

Okay, so maybe trying to figure out how to apply a new social platform to business is just, well, business. –And yet, does it makes sense when that platform (even if it IS Google’s platform) is still in testing?

Feedback is still pouring in, to the extent that Google posted a “known issues” page. They’re obviously still fine-tuning, especially in areas such asSparks and Gmail/G+ integration. In short, it’s still a work in progress, and any “test” will most likely end up with the conclusion of “we need to do more tests”.

Quite simply, we have no idea what the final pièce de résistance will be. While you’re planning how to use “Hangouts” for business purposes, they could very well be changing it to the point that your plan is useless (just as an example, people). Give it some time – learn how to use it, or how your target market will use it, before spending oodles of time planning!

The times they are a changing. The old Google is, quite simply, gone – for two reasons. One, they seem to have a fresh new perspective on how to finally reach out to their market (everybody). Two, and most importantly, they’ve become active listeners. They ask questions about a specific area of G+ (for example) and then listen to the answers.

Is it a kindler, gentler Google? Naw – it’s still gigantic monolith of a corporation with an eye on the bottom line and a finger in every honey pot. However, it appears that the company is, at the very least, a smarter, wiser Google. Kisses, and hugs from Europe…