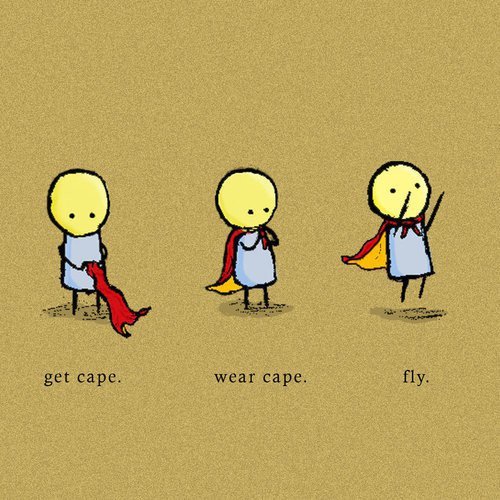 I Always Wanted to Be a Super Hero, How About You?

Level343 » Branding Articles » I Always Wanted to Be a Super Hero, How About You?

Superheroes also bring an element of excitement and adventure into the world. Ever since I heard their stories, I have been filled with admiration for the incredible things they are able to accomplish through strength, courage, resilience and ingenuity.

Superheroes are driven by a strong sense of justice and heroism, qualities that have always appealed to me. Being a Superhero means fighting for what is right and using your power to help those in need. It is something that I have always wished I could do and aspired to be since I was a child.

When I was a kid, I dreamed about flying through the air with the greatest of ease to rescue puppies, kittens and grannies. I ran around the house in pink fuzzy pajamas and a blanket tied around my neck, on a mission to save the world.  I was Supergirl, Wonder Woman and the GI Joes combined! Evil doers beware!

You remember how happy everyone was when the super hero saved the day? They clapped, waved their hands in the air, gushed their thank yous … and you thought, “Wow, that’d be so cool!” I always thought they were the cream of the crop, the crème de la crème, which excludes ordinary people, of course.

Funny thing is, when I grew up I found out that everyone can be a super hero. Even me. Even you.

Me, I’m a mom. I get up in the morning like every other parent and send my little loves off to school. Yet, once the home is empty, I slip into my super hero gear and fly off to save the world. Granted, it’s a small world, but the effects are the same.

Because, you see, I was able to join the Level343 Team. It’s like the Justice League for business! Everyday, we get to save companies from falling into oblivion. We get to help lift them up and make them shine brighter than they ever have before. We’re not just helping companies, though; we’re helping the people who make up those companies – the hard-working business owners and employees who are struggling to keep going. – And that’s awesome.

We beat down problems with the powers of our mind through creative brain storming with clients. Occasionally we work with other super heroes when the dark forces of competition are particularly strong and viral, like those shows where Batman and Superman team up. We even help some of our clients be heroes themselves when the case has something to do with reputation management.

Every once in a while it’s something big, like The Case of the Website Bandit when a client’s website got hacked. Some foul fiend had fiendishly (of course) hidden diabolical links in the client’s site. With ruthless determination, we investigated the cause of erroneous outgoing links, leaving no stone unturned. We uncovered the culprit files and, although the fiend got away, we saved the site. The client was happy, the Team was happy – happy endings, high fives and cocktails all around.

Now, maybe you think this is all a lot of make-believe from a grown woman who needs to gain a little maturity. Or, maybe you’re already getting the idea…

While doing research on how well brands are embracing social media, I came to a startling realization. When these brands address concerns for their customers, that’s just fancy marketing talk. What they’re really doing is saving the day – they’re coming to the rescue of the people who trust them.

These “brand-empowered” super hero stories are all over the Web:

In 2007, an American Airlines gate attendant became the heroine for an award-winning economist by saving his seat until the last second, allowing him to make his flight. A week later, a United Airlines employee went out of his way to make sure the economist had a seat on an earlier flight when the original one was delayed by several hours (read Outrageously Good Customer Service at Freakonomics).

In February 2010, an executive chef at the Ritz-Carltion, Bali did a good deed for a family whose son suffered from food allergies. When it was found that their specialized eggs and milk had gone south, he called his mother-in-law, who bought the products in Singapore and flew to Bali with them. The mother-in-law became a heroine.

The same year, an employee at Trader Joe’s became a family’s hero when a winter storm blew in and an 89-year-old grandfather was stuck in his house because of the snow. Trader Joe’s not only delivered a load of groceries to the man’s home, but also gave the food to him for free.

In August 2011, Morton’s Steak House exceeded the call of duty for a man who had too much flying and too many engagements he had to be at to have time to eat. He was really hungry after a busy day, knows he’s going to miss supper, too, and sends out a joking tweet to Morton’s corporate, “Can you meet me at the Newark airport with a porterhouse when I land in two hours? K, thanks.” An employee from Morton’s drove 23.5 miles to the airport with supper. The man, a well-known PR and social media leader was blown away. Morton’s saved the day.

There are oh-so-many more examples available – all you have to do is search for “examples of customer service”. You’ll find things like An Extraordinary Customer Service Experience and What’s Your Best Customer Service Story?

How Can You Be a Superhero?

You can be a super hero, too. Oh, maybe not like Superman or Captain America, but a super hero none-the-less. How? Well, let’s look at what the heroes, fiction and reality, have in common:

For the man racing to meet flights, what the employees did was no small thing. What about the elderly gentleman who couldn’t leave his home, what Trader Joe’s did was fantastic. For the family at the Ritz-Carlton, the chef and his mother-in-law did something unexpected, caring and awesome. These businesses became heroes to their customers, and their customers became fans for life.

This kind of super human action is not beyond you. It could take a few hours of a day. Maybe a few extra dollars out of your pocket. It may take some phone calls, a short walk or a long drive. Yet, for the relatively few hours you spend saving the day for your customer, you gain a lifetime fan. If that’s not enough motivation and you need something that ties into your business, you also gain a lifetime customer and a whole bunch of better PR than you’ll ever get from paying somebody to write it.

…is not about saving your brand or company’s behind. True customer service is about the people who trust you enough to invest their time and money into your brand. It’s about treating people like people – treating them like the backbone of your business that they are. It’s about being a super hero whenever the opportunity arises.

All around SEO coding geek; AKA "Bulldog" I'm a long-time Internet Marketing veteran specializing in organic SEO. I love the whole process of online marketing: developing the website, writing the content, optimization, data analysis, and (of course) the actual marketing itself. I've done it all and love it all. At the moment, I spend most of my time happily buried in SEO, website design/coding, and lovely, little regex redirects.
All Posts

Superheroes also bring an element of excitement and adventure into the world. Ever since I heard their stories, I have been filled with admiration for the incredible things they are able to accomplish through strength, courage, resilience and ingenuity.

All around SEO coding geek; AKA "Bulldog" I'm a long-time Internet Marketing veteran specializing in organic SEO. I love the whole process of online marketing: developing the website, writing the content, optimization, data analysis, and (of course) the actual marketing itself. I've done it all and love it all. At the moment, I spend most of my time happily buried in SEO, website design/coding, and lovely, little regex redirects.
All Posts