Revisiting High Quality SEO – What Did Google’s Updates Mean for You?

The Internet is starting to settle down a bit after Google’s updates, so now’s a good time to review the changes in terms of quality SEO. Did it make any difference to you or how you “live” on the Web? If it didn’t, you’re either lucky or haven’t been paying attention.

After a lot of wondering whether site speed made a difference or not, Google stepped up and said, “Erm – yeah it do. It do, indeed.” Just for fun, we tested site speed with the Site Speed plugin for Mozilla FireFox. I wasn’t expecting 100%, but we sure didn’t do well (even after telling everyone that site speed was important):

Now, it may seem that Google just gives us stuff to keep us on our toes. However, it’s all about the money. 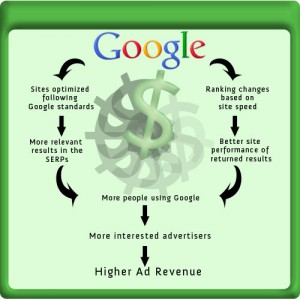 As well, keep in mind that site speed is a usability issue. Will you wait for a slow loading site? Nope, not really, not usually. By throwing site speed into the mix as part of the algorithms, Google hopes to ensure better SERPs results, right down to how fast the site loads.

Mayday Update
Have you noticed a drop in your rankings? Many can thank Google’s Mayday update for that. Matt Cutts said Google was “looking for higher quality sites to surface for long tail queries.” For some, Mayday was a blessing in disguise. Those who previously hadn’t been ranking now are which, in turn, brought up their traffic hits.

The rankings and subsequent traffic had to come from somewhere, however. Did they come from you? Check your rankings and, more importantly, check your analytics. Many have noticed a slight to serious rise/drop in traffic. Delve deep to see where the action is happening. For most of our clients, it’s been in referral traffic.

See, your site may be relevant, but those linking to you may not be. Consequently, they lose their ranking, which means they aren’t seen as often, don’t get as much traffic and won’t send as much traffic your way. However, if your drop is in the search engines, it’s time to reevaluate your site for the long tail.

Let’s not leave out the Caffeine update, which had a lot of people in a panic. What do we do, what don’t we do, how to do we account for this one…. Caffeine means umpteen times faster indexing, which means rankings can and will fluctuate. Period. It means, for those who have only been playing around with SEO, it’s time to get your ducks in a row. You can’t sit on SEO anymore; you have to keep on it to stay on top.

Read “The Three T’s for Stronger Optimization”. You’ll get a better idea of what it takes and what you should be doing to increase your site quality.

Google will continually update their search engine, algorithms and ranking factors. It’s as sure as death and taxes. The three things above are just the tip of the iceberg: real time search, personalized search, Page Rank changes, adding video listings to the SERPs…

The World Wide Web, it’s a changin’, and you have to be prepared for it. For high quality SEO, you need a plan; you need a strategy; you need to define what tactics will work for you, constantly quantify, qualify, test, then rinse and repeat. Don’t leave your SEO or the success of your website to chance!