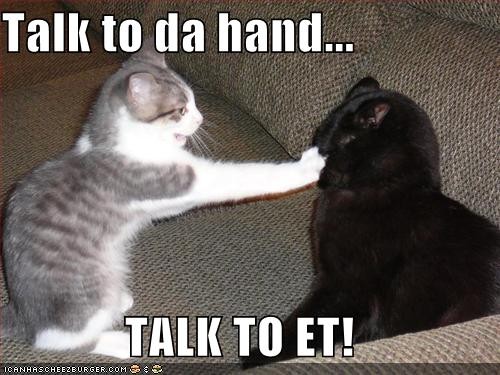 “What’s the ROI of Your Mother?”

Ah, what a lovely sentiment, spoken by Vayner Media’s Gary Vaynerchuk (and, incidentally, inspiring this humorous infograph from Flowtown, “What IS the ROI of Your Mom?”). Unfortunately, a recent conversation points out how misunderstood this statement often is:

And the second one… 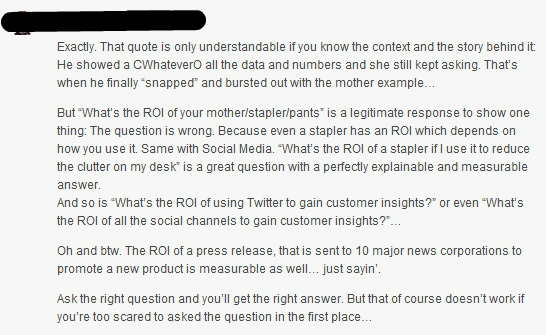 The ROI of Something All Depends on How You Use It

I’d like to pull out some statements from that last response and shamelessly use them for the rest of this article:

“The question is wrong.”

If you can’t measure or quantify the ROI of your social media efforts, you’re asking the wrong questions. In Marketing Online, What’s That ROI Formula Again?, we gave an example of the right kind of question to ask. In short, specificity makes a difference on whether social media ROI can be measured.

“… you must be specific; generic inference to activities just won’t do. For example, ‘I’m going to use social media to achieve this’ can’t be correctly measured, while ‘I’m going to post a Twitter exclusive coupon campaign, 4 times a day for a quarter, to increase sales’ is very specific.”

In other words, the right question in this instance would be, “What’s the ROI for posting an exclusive Twitter campaign to increase sales?”

Where the question of social media ROI turns wrong is that it’s a blanket question. You wouldn’t ask, “What’s the ROI of running a business” would you? No, you’d break that question down into specific areas.

“Even a stapler has an ROI, which depends on how you use it.”

For example, if you buy a heavy-duty stapler for $20 and it does double duty as a hammer (don’t tell me you’ve never done that), you’re not only stapling papers, but you’re also saving at least $10 on the hammer. That’s increased ROI on the stapler, that is.

Silly example, but I think you get my point, and the point of the commenter. The ROI depends on what the platform is and what you’re doing on it. Otherwise, you’re throwing noodles at the wall to see if they’ll stick.

“The ROI of a press release… is measurable as well…”

A 2008 TopRank article gave three great examples of press release ROI. It’s an old article, but the information is still relevant – and so is the explanation of social media ROI your clients and/or boss will want to hear.

You CAN measure the ROI of your social media activities. You CAN show your clients or boss examples. It’s more than possible. You just have to know how to do it.

Not all of these examples should be used to describe ROI, especially if you have an audience that needs dollar signs. For example, the Jamba Juice case study ends with “The coupon campaign drove tens of thousands to Jamba Juice stores.” Of course, it’s Return on Investment of a sort, but it doesn’t show the bottom dollar. Neither does the KRAFT example (#5), unless the entire purpose of the campaign was to increase Twitter followers. Increased Twitter followers does not, necessarily, translate to increased sales.

The case study for Hautelook (#3) is well worth a serious look, however. Although it doesn’t share an exact dollar amount, the final sentence says it all:

“Not only did Hautelook generate thousands of new fans they also generated tens of thousands of sales in just one day and a return on investment of more than 5x and over 20% of purchasers were first time Hautelook customers.” (emphasis mine)

How Social Media Helped Cisco Shave $100,000+ Off a Product Launch

The title alone should be enough to excite any executive. The money quote, however, is buried in the content of the article:

“’It was classified as one of the top five launches in company history,’ said LaSandra Brill, senior manager, global social media. (emphasis mine)”

Don’t miss this one. Here’s the money excerpt:

“What CareOne found was that the personal connection for consumers (having some sort of social media contact with the company) led to a longer buying cycle (24-28 days versus as low as 30-minutes for those without a social media relationship with the company), but an incredible jump in successful conversions through the sign-up process and ultimately the point of purchase.

How much of a conversion? Social media connections filled out the consultation (lead-generation) form at a 179% higher rate than the typical customer. Sales? They were 217% more likely to make their first payment. For one particular problem area (people who partially fill out the sign-up form then quit), social media prospects went back and completed the form at a 680% higher clip than non-social media leads. They made their first payment at an astonishing 732% better rate.”

As you can see from the various examples, the last commenter was right. The ROI of social media all depends on how you use it. It depends on what your goals are – and those goals don’t always directly translate into sales.

The next time you talk to a client or your boss says, “What’s the ROI,” take a deep breath. Remember that there really is a Return on Investment, it really can be measured, and you have the examples to back it up. – And for love of professionalism, please don’t say, “What’s the ROI of your mother?”

The Rise of SMAC

How to Wisely Use Data In Your Social Media Campaign

How To Compete In The Blog World

4 min
X
How Do You Convert Readers To Buyers?Brand MarketingHow many times have you read or heard about how to generate more traffic? It always sounds easy, doesn't it? Very seldom does someone actually tell yo…