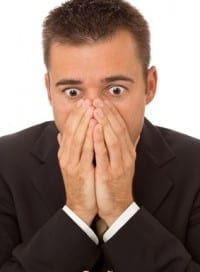 The first time it happens, your heart races as you stare in disbelief. Sure that something must be momentarily wrong with your computer, or your browser, you frantically open a different browser and search again. When the same result appears, it feels as though the world has shifted on its axis. You check stats and see the devastation displayed graphically – a line sharply slanting downward into an abyss of declining traffic.

Shock turns to panic as you rush to find answers from forums, social networks, friends…anyone who might be able to make sense of the devastation. As the morning turns to afternoon, your eyes begin to blur from the hundreds of posts you’ve read from others who are as frantic as you. Disaster has truly struck. Google has just released a massive algorithm update.

I’ve seen this scenario played out many times over the last decade, and I know exactly how it feels, as I’ve had sites take the plunge on more than one occasion. I’ve also been on the other side of that same fence, as I watched my sites benefit while other webmasters weeped. Along the way, I’ve done many things wrong, and some things right while reacting to the heart-stopping drop in rankings.

Below is a list of things I’ve learned to do, and things I’ve learned to avoid when faced with a sudden SERPS plummet. And yes, I’ve done all the “don’ts” in this list, some on more than one occasion. I guess it sometimes takes me a few burned fingers to learn that I shouldn’t touch a hot stove. But no matter how many times I reacted the wrong way when faced with a rankings loss, eventually, I learned my lessons. I hope sharing a few of them will serve you well the next time you face the dreaded sight of lost rankings.

The blow from that heart-stopping moment when you see your rankings drop will always be painful, but if you keep these points in mind in the hours and days that follow, you’ll have a shot at recovering much more quickly – with far less stress.

Have we missed anything? Do you have any tips for handling the shock of a rankings drop? Let us know.

Is there ANY Good News in This Current Controversy?

X
The Perfect SEO Tool PackageSearch Marketing (SEO)We have a Raven SEO Tools account, and in light of their recent announcement that it will no longer provide Google rankings and will completely elimin…

5 min
X
Ramblings Inspired By A TattooOnline MarketingRecently I got a tattoo and my nieces and nephew (who are 6, 8 and 10) asked me why I liked permanent tattoos (versus the ones that you stick on and t…